How to celebrate diversity through the arts 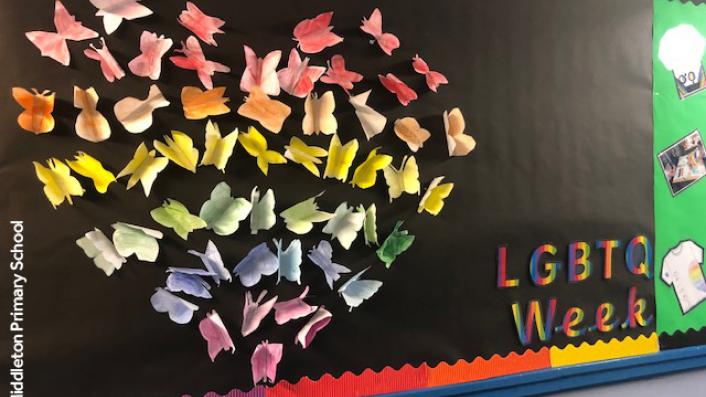 Respect – for oneself and for others – is one of the key values we teach at Middleton Primary. Our school is made up of staff and pupils from various cultures and communities, so we understand the value of diversity and tolerance.

As an inclusive school, these topics already feature in PSHE lessons but as some pupils may not have had the chance to engage with LGBTQI+ issues outside school, we wanted to go further and actively celebrate the LGBTQI+ community.

The first question, therefore, was how to go about this. We already celebrated Black History Month, International Week and Anti-Bullying Week; we needed something with just as much impact – and we found it in the arts.

Middleton is part of Arts Council England’s Artsmark Award programme, which supports schools to enrich their arts provision. Our local area is one of the 5 per cent most deprived in the country – 43 per cent of children are eligible for free school meals, and 59 per cent qualify for pupil premium funding. Unfortunately, many of our children have little opportunity to engage with arts and culture outside of school, so we do our best to provide these opportunities in abundance.

On our journey to our Artsmark Silver award, we wanted to develop a much richer arts curriculum for every child, to grow our pupils’ skills, confidence and engagement. It’s been amazing to see their pride in their achievements throughout this process, as well as a change in the way our whole school community now values creative learning. An arts week was, therefore, an obvious choice when teaching about LGBTQI+ issues.

So how did we achieve this? Before we even considered what form our artistic endeavours would take, all staff received two three-hour training sessions from Barnardo’s children’s charity, designed to raise awareness of LGBTQI+ issues and the difficulties faced by young people struggling with their sexuality. We then set aside time for staff to share their learning with other teachers across the school, and extended this to include parents and carers by sharing the activities on our website and in our newsletters.

The Barnardo’s training was really beneficial in raising staff awareness and understanding of LGBTQI+ issues – something that the majority of us did not have. We might not have felt confident talking these issues beforehand. The training prepared us to deal with any difficulties along the way and gave us the knowledge to talk confidently about sensitive issues.

Throughout the week itself, children took part in arts activities such as designing T-shirts, creating posters and writing poems to celebrate LGBTQI+ rights. We also brought in school music project Class Dynamix to help pupils create songs on the subject, which they performed during an assembly at the end of the week.

The assembly, packed with parents and carers, was a fantastic opportunity for the children to showcase their achievements, and became a hugely positive celebration of tolerance and acceptance.  As a lasting memory of the week, the children and parents painted a path of rainbow-coloured pebbles, where each child could express what LGBTQI+ rights meant to them.

Our children fully embraced what they were taught, and we found that they instinctively understood the values of diversity, inclusivity and equality we set out to promote. Homophobic behaviour, especially children using the word "gay" as an insult, has fallen. Children who identify as part of the LGBTQI+ community feel more able to be open about their lives, and other children are more understanding.

The learning from the week has continued across our whole curriculum, with children learning about LGBTQI+ issues in various subjects – for example, when Year 6 pupils studied Alan Turing, they not only learned about his enduring influence as a scientist, but also explored how he was persecuted because of his sexuality.

Incorporating the arts was essential to educating our children about LGBTQI+ issues.  Not only did the chance to do something fun help to draw the children in, but by having to think creatively about the topic they also became more engaged and considered about the issues than they ever would have become just by reading from a textbook.

The rewards have been enormous. As one of our Year 2 pupils put it: “It doesn’t matter where you’re from or who you support, the important thing is you look after the world because this is everyone’s.”

Sam Williams is headteacher of Middleton Primary School in Leeds